"It can't be that everyone's gone crazy."
The middle-aged woman was speaking to an elderly woman I took to be her mother. They were walking the graffiti gauntlet along the Justice Center's north side. Her tone was disbelieving and explanatory a the same time. They had the guileless simplicity of midwestern tourists out of old America.

Last night demonstrators were ferocious, assaulting the building with industrial-grade fireworks, pulling down the plywood boarding and trying to set them on fire. At some point US Marshalls emerged from the US District Court building next door to make an arrest.


bars police from arresting or using physical force against anyone they “know or reasonably should know” is a journalist or legal observer - unless officers have probable cause that the person has committed a crime. The order also states that police can’t remove cameras, recording equipment, or press passes of journalists and legal observers nor can they ask them to disperse.

Many antifa allies record and livestream their actions, and I've seen one or two wearing something that said "press" on it but who were clearly there as enthusiastic participants. Their intention is to capture some example of police brutality and they make no pretense of objectivity because they don't know what the word means. They've produced some enviable livestreams (often with cringe-inducing live narration) but I've watched as one (in Seattle) claimed press status when police pressed, disdained objectivity later as he booted people off his live chat, and then drew attention someone else filming--a stranger he didn't recognize that could have been a right-winger or, even, an objective journalist--for interrogation. When the police pressed forward again, he claimed press status.

Attorneys with the ACLU had been hoping the judge would intervene before the start of the long weekend. On Thursday afternoon, Judge Simon issued protections that will last for the next 14 days.


The suit claims that police in Portland have tear-gassed, pepper-sprayed, beaten and arrested journalists, observers and other neutral bystanders who are documenting the police’s response to protests.

“The police should not be shutting down the public’s access to the messages and realities of protest in Portland’s streets where people are calling for an end to police killing of Black people,” said Kelly Simon, interim legal director of the ACLU of Oregon in a statement.

“Police in Portland are making a mockery of the First Amendment by targeting journalists, using excessive force, and by using indiscriminate crowd-control weapons. Police actions have had a chilling effect on the media and protesters.” The lawsuit was filed in U.S. District Court in Portland and lays out multiple reports of violence against journalists at the hands of police.

Filed in the same US District Court boarded up, enveloped in the obscene and violent graffiti of BLM and assaulted nightly for over a month.

It would be perfect if instead of a gavel the judge used a clown horn.

A young man has taken up a vigil on the base were the David P Thompson Elk statue once stood; he sits there eyes closed like an eastern holy man. 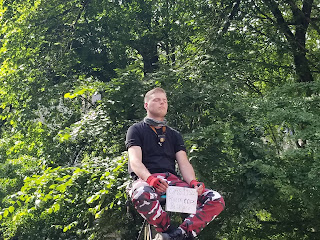 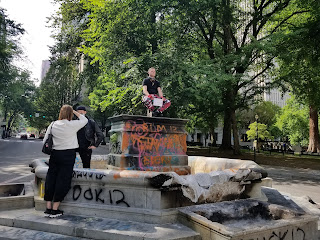 A crowd of not quite a hundred gathered at the waterfront to hear black-clad black people recite the social justice mass under a beautiful sky. Boats, inner-tubers and a jet-ski fillied about in the water indifferent.
Back in front of the Justice Center I heard a commotion that appeared to be coming from one of the upper floors. About four or five up one of the stories is open-air, and looks like a wide open bay hemmed in by chain-link fencing.

Tortured screams could be heard.