Dennis, still alive, after a fashion

I intend to resume real writing here soon, as well as the fictional thread over at Storyboard. Sanity and order are reasserting control and even now are rapidly reclaiming the psychological territory lost to the rebel forces of sloth and intemperance over the last few months. They advanced quickly but cannot hold their gains, as always (hey, were talking about sloth and intemperance here). As rapidly as they acquired territory they will yield it back to my determined counter-insurgency. The smoke is settling; I can see the landscape of my mind, gouged by bomb blasts and littered with corpses. It's only a matter now of cleaning up the mess and convincing the population it is safe to return. Until the next assault. The Surge is working through mass arrests, extraordinary rendition, a shameful reliance on air power regardless of civilian casualties (there goes a Hellfire now, obliterating a van full of insurgent impulses--or just wreaking more collateral damage by destroying civilian brain cells) and of course by walling off the emotionally cleansed sectarian neighborhoods of my psyche. Psychological reconciliation proves elusive still, but we're in this for the long haul. This is the long war!

Well, I'm gone to Detox Mansion
Way down on Last Breath Farm
I've been rakin' leaves with Liza
Me and Liz clean up the yard
(...)
Growin' fond of Detox Mansion
And this quiet life I lead
But I'm dying to tell my story
For all my friends to read
--Warren Zevon, Detox Mansion
- May 27, 2008

"Your guide to the idiom of mass delusion"

Bush Derangement Syndrome, neoconservative neologism,
1. The inability to sublimate the disdain felt for a criminally incompetent president.
2. Outrage at the crimes and incompetence of same.
3. Undue veneration for the Constitution, the rule of law, truth, common decency, or good sense during the period between January 20, 2001 and January 20, 2009.
- May 25, 2008 No comments:

Email ThisBlogThis!Share to TwitterShare to FacebookShare to Pinterest
Labels: Phrasebook

Read my article on the government's tax rebate scheme,"Unreality Check", in real ink on real paper (unavailable online) in the May 19 issue of the American Conservative. Featuring also these more authentic writers:

The Next Fidel
By Peter Hitchens
Hugo Chavez’s socialist program drives Venezuela to the brink of dictatorship.

When the Left Was Right
by Bill Kauffman
Before the Weathermen detonated SDS, Carl Oglesby was trying to build a Middle-American movement.

Less Perfect Unions
by Margaret Liu McConnell
Extending marriage to same-sex couples negates the ideal that no parent should abandon his child.

Turning on to J Street
By Michael Brendan Dougherty
A new lobby redefines what it means to be a friend of Israel.

The Wright Answer
By Steve Sailer
Putting Wright to rest

The Road to Kuwait
By Lawrence Korb
The Iraq exit is clearly marked.

Faith of Our Father
By James P. Pinkerton
Under God: George Washington and the Question of Church and State by Tara Ross and Joseph C. Smith Jr.

Necessary Evil
By John Lukacs
Churchill, Hitler, and the Unnecessary War: How Britain Lost Its Empire and the West Lost the World by Patrick J. Buchanan.

Ode to Joy
By Peter W. Wood
Against Happiness: In Praise of Melancholy by Eric G. Wilson

Liberalism’s World Wide Web
By Austin Bramwell
Heads in the Sand: How the Republicans Screw Up Foreign Policy and Foreign Policy Screws Up the Democrats by Matthew Yglesias

Email ThisBlogThis!Share to TwitterShare to FacebookShare to Pinterest
Labels: music

When the raised middle finger became a salute may have been the moment the momentum of aggregated self-indulgence crested, and we began our final decline. When rappers and others started flipping off the camera, making "screw you" the desultory greeting of a generation, the Apocalypse had to be near. It had better be, preferable as it is to the hell of mediocrity that the culture of the raised finger represents.

You may have seen the wishful-thinking joke below. What I'd like to draw your attention to is the contrast in Bush's body language. He's giving the thumbs up, but his expression and posture are giving us the finger (click on to enlarge): 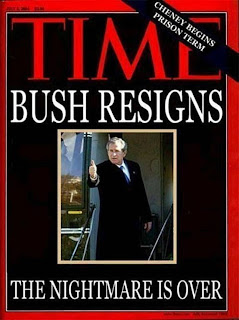 He might as well have a gun in his hand. Of course, there's this gem:

Email ThisBlogThis!Share to TwitterShare to FacebookShare to Pinterest
Labels: culture

Quiet. Too, Too Quiet

Even as it seems some sort of strike on Iran is not just inevitable but imminent, proof of widespread Iranian arming of Shi'ite militias is still the dog that hasn't barked. Via Laura Rosen, here the LAT's Tina Susman reports on a conspicuous absence:

There was something interesting missing from Maj. Gen. Kevin Bergner's introductory remarks to journalists at his regular news briefing in Baghdad on Wednesday: the word "Iran," or any form of it. It was especially striking as Bergner, the U.S. military spokesman here, announced the extraordinary list of weapons and munitions that have been uncovered in recent weeks since fighting erupted between Iraqi and U.S. security forces and Shiite militiamen.

The omission is creepily un-reassuring. Further:

A plan to show some alleged Iranian-supplied explosives to journalists last week in Karbala and then destroy them was canceled after the United States realized none of them was from Iran. A U.S. military spokesman attributed the confusion to a misunderstanding that emerged after an Iraqi Army general in Karbala erroneously reported the items were of Iranian origin.

Last week the US military reported finding "very, very significant" amounts of Iranian arms during the offensives in Basra and Baghdad. We're waiting. Of course, even the excuse used above raises the unsettling suspicion that Iraqis are being encouraged to "find" Iranian weapons.
Evidence given to last week's United Iraqi Alliance delegation to Iran remains secret, and while US media reports characterized the visit, with much encouragement from the administration and the US command, as a confrontation, the Iraqi account of the the delegation's purpose substantively differs. The US finds itself in the dubious position of fostering hostility between Iraq and Iran, to preserve the occupation. In fact, with all the hedging Iran is doing, supporting various Shi'ite factions and engaging in the sort of development that was to be a centerpiece of US efforts, it's not certain the net effect of its involvement is negative--for Iraq's stability.

If not for the administration's previous and unrelenting hostility toward Iran, it might be arguing, if privately, that widening the war is dubious strategy, regardless of Iranian involvement. Despite aerial strikes on Quds force traininig camps that will be the loudly stated reasons for the coming escalation, it's hard not to conclude that our purpose will be to destroy Iran's nuclear program, a purpose predating the war, and it will be done to the detriment of the war effort, and those charged with it.
- May 09, 2008 1 comment:

Email ThisBlogThis!Share to TwitterShare to FacebookShare to Pinterest
Labels: war

JENSEN
You have meddled with the primal forces of nature, Mr. Beale, and I won't have it, is that clear? You think you have merely stopped a business deal -- that is not the case! The Arabs have taken billions of dollars out of this country, and now they must put it back. It is ebb and flow, tidal gravity, it is ecological balance! You are an old man who thinks in terms of nations and peoples. There are no nations! There are no peoples! There are no Russians. There are no Arabs. There are no third worlds. There is no West. There is only one holistic system of systems, one vast and immense, interwoven, interacting, multi-variate, multi-national dominion of dollars;
(...)
You get up on your little twenty-one inch screen, and howl about America and democracy. There is no America. There is no democracy. There is only IBM and ITT and AT and T and Dupont, Dow, Union Carbide and Exxon. Those are the nations of the world today. What do you think the Russians talk about in their councils of state -- Karl Marx?
(...)
The world is a business, Mr. Beale! It has been since man crawled out of the slime, and our children, Mr. Beale, will live to see that perfect world in which there is no war and famine, oppression and brutality -- one vast and ecumenical holding company, for whom all men will work to serve a common profit, in which all men will hold a share of stock, all necessities provided, all anxieties tranquilized, all boredom amused. And I have chosen you to preach this evangel, Mr. Beale.

JENSEN
Because you're on television, dummy.