Sympathy for the Devil

So Mr. Santorum has invoked Satan. The pro-Romney Drudge Report is is assaulting this newly identified breach with standard all-cap hysterics and ominous cliff-hanger dramatics ("DEVELOPING..."). We're all atingle. Send the children to their rooms. Related, Obama is going pre-emptively negative on Romney in Michigan (Santorum's got to look like Christmas to the White House, and not because of the sweater-vests).

Apparently the only thing worse than questioning God's guiding affection for America is asserting the Devil's active malice for her. I don't understand.
That's American politics: it's all God, God, God, and all very glib; and when it isn't God, indeed, when it is specifically not God, it's the giddy god of Progress. Never a word for the Devil--politics refuses to acknowledge its father.

But what is Santorum guilty of, besides a gauche display of literal faith? Certainly Satan makes a good metaphor for our collective failure of character; it can be argued that some mortal few of us are energetically "attacking the great institutions of America, using those great vices of pride, vanity, and sensuality".

I think he's only being polite, not calling out by name the progressive agenda for America, which he may want to make nice with later. The Devil makes them do it. Does the Devil walk the halls of the Pentagon too, Rick? Or is he unable to get past security? Do the walls within emit a heavenly glow and the faint hum of castrati? Who is this Devil of yours, and how is he contained?

I rise in defense of Old Scratch. And why not? The Devil needn't lift a finger to enjoy our demise.
- February 21, 2012 No comments:

Email ThisBlogThis!Share to TwitterShare to FacebookShare to Pinterest
Labels: politics

Get me something that goes really fast and gets really shitty gas mileage, I work for Dick Jones!

Contra kitschmeister Clint Eastwood, the dystopian Detroit of Paul Verhoeven's Robocop, a failed city where street gangs rule the night and private contractors compete with the police, is coming to pass:

"We got to have a little Old West up here in Detroit. That’s what it’s gonna take,” Detroit resident Julia Brown told The Daily.

The last time Brown, 73, called the Detroit police, they didn’t show up until the next day. So she applied for a permit to carry a handgun and says she’s prepared to use it against the young thugs who have taken over her neighborhood, burglarizing entire blocks, opening fire at will and terrorizing the elderly with impunity.

“I don’t intend to be one of their victims,” said Brown, who has lived in Detroit since the late 1950s. “I’m planning on taking one out.”
(...)
The city’s wealthier enclaves have hired private security firms. Intimidating men in armored trucks patrol streets lined with gracious old homes in a scene more likely seen in Mexico City than the United States.

That kind of paid protection can run residents anywhere from $10 to $200 per month, and companies say business is good.

“We’re paramilitary, but we’re positive. I’m not a vigilante. I’m an agent of change. 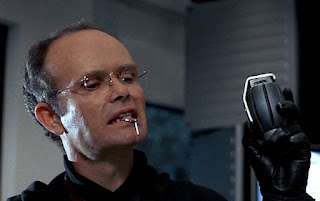 Sock it to the Man, Flav. How are black people with irony?

I can sure appreciate the irony of Detroit's last remaining law-abiding black citizens advocating for the right to bear arms--that "racist" legal relic, according Chicago's preening police chief and Candidate "clinging to guns" Obama. They level this charge oblivious to its converse: the law-abiding citizens of, say, rural Pennsylvania, are compelled to surrender a right they've held responsibly because of the failure of a feral few favored, by progressives, for their race. But the left will not concede even this; they'd have you believe the right never existed in the first place, than acknowledge they are in the business of destroying it.

Progressive logic insists none of us can have guns because Obama's homies can't resist shooting each other (and others) with them. But it's worse than that: they would deny us this means of self-defense against these same street thugs--on whose behalf progressives advocate generally, to the degradation of other customs, laws and conditions. Progressives want you to die. That's not fair, of course; it's just that some random innocent few of us must die, for justice to prevail. Your death is incidental.
- February 08, 2012 No comments: