"All the News that's Irrelevant"

It's important in these times of crisis to not forget the important things, like black women's hair:


Niani Barracks usually tends to clients at a salon in Detroit, but now that she must stay indoors because of the coronavirus pandemic, she has been running her fingers through the hair of a mannequin head affixed to a stand in her home, as a dozen other black women, who paid $5 each, watch her on Facebook Live.

In one video, Ms. Barracks gently cradles three strands of hair between her fingers as she explains how to start a braid.

The skill is essential for many black women trying to keep their hair healthy while they practice social distancing. Braids are the foundation of many protective hairstyles, like wigs and hair extensions.

One positive effect of all this social distancing means black people won't be oppressed by white people asking to touch their hair, at least.

I have personally never witnessed a white person asking to touch black hair and have never heard a white in private express fascination with black hair, but--seeing as black people and social justice theorists are such dependable sources of truth--I'll assume there's at least one horrible whitey out there asking to touch black hair; maybe like Johnny Carson's old joke about Christmas fruitcake: there's only one out there, people just keep passing it around.

Soon we'll be down to the last white "racist" and all the assholes out there are going to have to share.
- March 27, 2020 No comments:

The Opiates of the Masses are Rotting in the Fields

Soon groupies will be writhing on their beds of lust as well.

Courtesy of "anon[762]" at Sailer's; add the wail of sports cucks to the "lamentations of [your defeated enemy's] women and children" Genghis Khan is supposed to have delighted in: 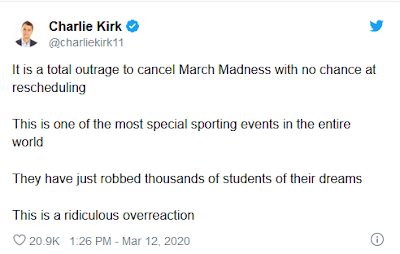 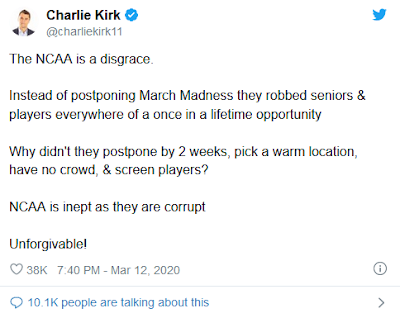 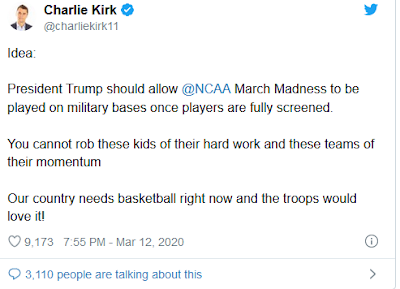 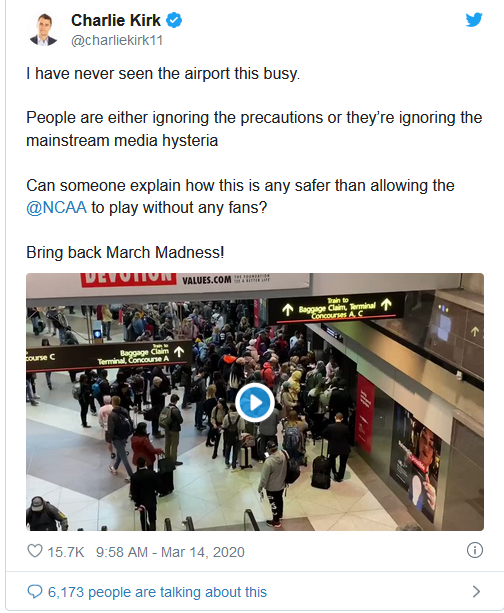 Send in the Clown

Straight From the Horse's Mouthpiece

This is an opinion piece from an editorial board member and not an actual editorial in Bloomberg News, which presidential candidate Michael Bloomberg still owns (and which is giving the Democratic field a pass to avoid having to report on his campaign), but is no doubt in perfect sync with the thinking of both Michael and Mouthpiece:


(Bloomberg Opinion) -- The chaos of 2015, when more than a million refugees came to the European Union within a year, caused lasting fractures between and within the bloc’s countries. Now growing numbers of migrants are once again crossing into the EU from Turkey. It’s too early to tell whether this mounting crisis could become another “2015.” But it’s already clear that it’s blowback for the EU’’s utter failure to reform its migration system in the past five years — a failure that leaves it open to blackmail by cynical autocrats like Turkish President Recep Tayyip Erdogan.

The current refugee crisis is not "blowback" for the EU's failure to adopt policies--the author doesn't seem to understand the meaning of the word as "resulting from"--but blowback from the West's (and Turkey's) war on Syria. The "reform" he speaks of was the plan, rejected by "populists" in Poland, Hungary and elsewhere, to distribute the wretched of the Middle East throughout Europe--to absorb Merkels Mistake of 2015 (in which the author finds no fault--other than in execution).
The Europeans left themselves open to blackmail by migrant horde when they killed Khadafi; whatever the case, after that debacle (which prompted all this) for a Western elite to tut-tut about blackmail is unseemly and naive.

Blackmailing Khadafi to keep control of his borders was cheap and even moral (far more moral than subjecting Europe to rape by migration)--though ultimately not necessary, as the notion the Europeans are somehow incapable of maintaining borders (we had to get to the technological age for this basic function to become physically impossible, they'd have you believe) is bullshit. The will to defend the borders, up to and including shooting people, is all that is really lacking. Furthermore, once it's demonstrated in earnest, they stop coming. An efficient border control system: if you build it, they will not come.


Though nominally a NATO ally and applicant to join the EU, Turkey is increasingly becoming a geopolitical threat to the West. Erdogan is waging a war in Syria for which he wants European support, even as his onslaught swells the huddled masses trying to escape the hell of Idlib. To put pressure on the EU, Erdogan is actively shooing more of the roughly 4 million refugees in Turkey toward Europe. That directly contravenes a deal Turkey and the EU made in 2016, when Erdogan, in return for lots of European money, promised to prevent migrants from crossing to Greece and to take back any who did... If, however, the EU allows the migrants to enter, that will create even bigger problems. As soon as word gets out that the borders are “open,” more people will set off on their journey, not only from Syria but also from Africa, Afghanistan and elsewhere. The rush of migrants would be another gift to populists, who tend to be both xenophobic and euroskeptic. A new refugee crisis would mean more populists in more countries trying more brazenly to undermine the EU from within.

You could drive a caravan of rape gangs, terrorists and future welfare sponges through the skipped-over part between "The rush of migrants..." and the subsequent "gift to populists"; a lot of things happen in between.
On dispaly here is the elite's refusal or (terrifying) inability to recognize the harm they cause, in countless ways of which the refugee racket is just one, to countless ordinary people.
Those people who, in outright desperation at this point, seek help in--that hallowed thing--democracy, and are accused, by Prince Oblivion here, of trying to "undermine" the supposedly democratic EU, "from within" (you've got to love the "brazenly" part--how dare they!)
So: if you're in the EU you get in line--and if you're out, well, your government and the EU will do everything they can to make sure you can't get out. It's the Hotel California, you can never leave, but are invited to check out via endless cheap thrills and amusements.

But one thing that still drives me mad, is to see people talking about the disaster Merkel unleashed upon her political career and the fortunes of her political party--this woman should be cowering in her bed at night at the thought hell might be real.


Such a dilemma could have been foreseen since 2015, when the backlash against the refugees almost toppled Angela Merkel as German chancellor. That makes EU leaders’ failure to prepare for a new crisis all the more glaring. It defies comprehension that the union today still has the same flawed migrant regime that broke down so spectacularly in 2015. Called the Dublin System, it requires migrants to apply for asylum only in the first EU member state they physically enter, which usually means Greece, Italy or Spain. In effect, the system leaves those frontier states to cope — or not cope — on their own, even though most migrants plan to move on to northern countries. Overwhelmed, Greece just suspended its processing of asylum applications for a month. The system is both dysfunctional and unfair.

The answer is not to shut down Erdogan--who seeks the destruction of the author's beloved EU with his betrayal and stunt--at the border; no, the answer is to more efficiently receive and distribute the horde throughout Europe. Okay, Glober.
- March 03, 2020 No comments:

How to Not Get Hit

In the fourth installment of James LaFond's self-defense series: not getting hit by fists and small objects.