Now Repeat After Me

The Derbyshire agitation has so excited the wolves The National Review has deemed it necessary to throw a second passenger from the troika. The pack won't be sated as long as they're on the scent of blood, of course, so the remaining riders must be eyeing one another warily. Who's weak? Who's suspect? Is it me? Terror achieved. 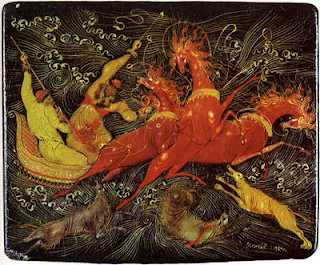 Just a day after Rich Lowry agreed to dispatch contributor John Derbyshire for hate-cognition the editor was called on his new standard of association. From the left's Internet middle-management corps came the blog-memo: Robert Weissberg said "white nationalism" at an American Renaissance conference, surely a sin as great as Derbyshire's--ergo...
Lowry wouldn't make the same mistake twice--this time he'd waste no time in capitulation. He posted Weissberg's denunciation immediately, thanking the complainant for bringing the matter to his attention. Moving along...
But opening his disavowal with "Unbeknowst [sic] to us..." invites more interrogation: How could you have not known? Just what did you know? Who's responsible for associating the magazine with these men? Why the typo? Someone have a guilty conscience? 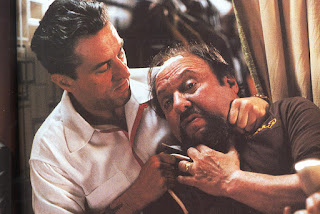 "I never agreed to three points on top of---gahgagghaggh!--noxious, right!--gaguhgrr!--noxious, noxious, I got it!"

*Lowry's quick-cave drew the condescension it deserved in an update to the original point-and-sputter post:
Update: Lowry has severed ties with Weissberg. In a statement, Lowry noted, "Unbeknowst to us, occasional Phi Beta Cons contributor Robert Weissberg (whose book was published a few years ago by Transaction) participated in an American Renaissance conference where he delivered a noxious talk about the future of white nationalism. He will no longer be posting here. Thanks to those who brought it to our attention."
You're welcome.

No longer did Wall Street mean Protestant Good Family. There were plenty of prominent Jewish investment bankers...plenty of Irishmen, Greeks, Slavs. That none of the eighty members of the bond department was black or female didn't bother him...the bond trading room at Pierce & Pierce was no place for symbolic gestures.
--The Bonfire of the Vanities
- April 09, 2012 No comments:

Regarding John Derbyshire's instantly (in)famous The Talk: Nonblack Version piece in Taki's (contrasting the faddish meme "The Talk"* and its hoary assumptions about racial hostility, with the reality of the known world), Mr. Josh Barro in Forbes steps into the town sqaure to deliver the King's writ as he sees it ("National Review Must Fire John Derbyshire"), and helpfully remind conservatives of their priorities, as such (no higher calling than Republican branding, for the "serious"):

And this is the problem for Lowry and other conservatives who want to be taken seriously by broad audiences when they write about racial issues.

"taken seriously by broad audiences"?
This is called selling out.
I understand why the aspirational individual seeks this; for the life of me I don't understand why he encourages it in others. How does one sleep at night knowing he is both pimp and prostitute for a great lie? Your affected enlghtenment isn't enough? What will you do if and when you've routed the racists? Who's next in providing you with the opportunity to prove your religious devotion?

"The Talk" as black Americans and liberals present it (to wit: necessitated by white malice), is a comic affront--because no one is allowed (see Barro above) to notice the context in which black Americans are having run-ins with the law, each other, and others. The proper context for understanding this, and the mania that is the Trayvonicus for that matter, is the reasonable fear of violence. This is the single most exigent fact here--yet you decree it must not be spoken. You admit the reason for taking the topic off the table is that it offends. In your logic the one necessarily follows the other. Rarely does anyone in your well-heeled (and easily brought to heel) mob address points of fact; rarely do you make a pretense of showing where this argument is wrong. Your "acceptable discourse" is defined by an appeal to consequences.

But you're right, of course. Our discourse is not a search for truth; it's a battle--not of ideas, for they aspire and are vulnerable to the truth--but for power.

Shame on you. People are dying. Worse still, you bore us. Good for Derbyshire.

I'm proud to stand with Josh Barro and the Atlantic's Elspeth Reeve and Matt O'Brien. Simply because somebody is playing the role of a "public intellectual" doesn't give them a license to write about ideas. Yes, they should feel relatively free to think private thoughts as they wish. But the vibrant tapestry of our current public discourse -- which ranges from Trotskyist anarchy on the Left all the way to SWPL Portlandia on the Right -- can only be damaged by the voicing of divisive notions.

Strongly disagree that Derbyshire's article was "appalling". I thought that word was reserved for ninnyish liberals who overheard someone defend George Zimmerman.

Personally I find the core values of NR--lowering taxes on the wealthy and spilling American blood for Israel--personally repugnant, even "appalling". So I'm non-plussed by your take on Derb's honest, intelligent Taki piece. Looking forward to the decline of National Review as a mouthpiece for pseudo-conservatism.

*The supposedly routine "Talk" about the danger of racist white cops. You've seen it on TV: solemn black parent, wearing the dignity of hundreds of years' suffering, tells doe-eyed children you got to look out for the Man always and be on your best behavior, because white folk just mean ("Mama, why do they hate us so?").
See Skip Gates (“All the hairs stood up on the back of my neck, and I realized that I was in danger");
Tyler Perry ("it took a black cop to realize I was a Celebrity and allowed to drive my car in any damn direction I please! Can you imagine the indignity?");
and Chris Rock.

It also occurs to me that we cannot trust that black parents actually are sitting their children down to instruct them in safe police protocol. After all, it doesn't seem to be working very well. Hatred of police is a jealously guarded romance in black American life. Who's to say young blacks aren't more often told by hard-headed elders not to take any shit from cops, or whites, or hispanics (or white-hispanics).
- April 07, 2012 4 comments:

Email ThisBlogThis!Share to TwitterShare to FacebookShare to Pinterest
Labels: race, the myth of white racism, twits 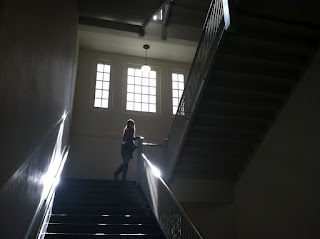 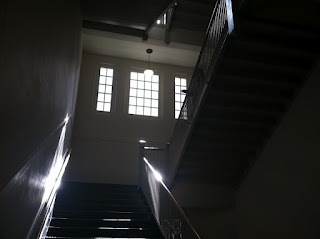